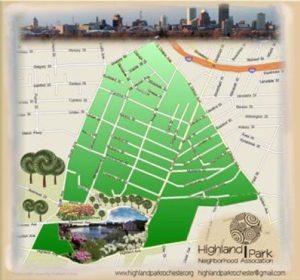 Among the patchwork of neighborhoods in Southeastern Rochester that give the area its distinctive and desirable character is the Highland Park Neighborhood. This stable and family-friendly area stretches from Highland Avenue north to Gregory Street between South Clinton and South Avenues.  The neighborhood is one of the most pleasant and livable in the city of Rochester. Named for the gem of Rochester’s parks, Highland Park, the area is home to over 2000 households.

The Highland Park Neighborhood has deep historical roots. The original name for the neighborhood came from George Ellwanger and Patrick Barry who started their nursery business here in 1840.  Their enterprise grew into the largest horticultural business of its kind in the world and, together with other large nurseries in the area, played a significant role in Rochester’s claim to the title of “The Flower City”. The Ellwanger & Barry Nursery developed and shipped an enormous variety of nursery stock great distances. George Ellwanger later recalled that “all the original orchards in California were planted from our nurseries”. As the business declined, they started diversifying their land holdings into real estate development starting in the 1870’s. This was the beginning of a large portion of the residential neighborhood. In 1888, Ellwanger and Barry’s offer of a large tract of land to the City of Rochester was accepted and formed the core of Rochester’s first park, designed by Frederick Law Olmsted and today a world class arboretum and home to the century-old Lilac Festival.

Adjacent to the South Wedge Area, the neighborhood has many examples of beautifully maintained late 19th and early 20th century homes retaining the details of an earlier era. Houses are of a scale and style which encourage single family ownership, with homes from 1000 to over 3000 sq ft., most being in the middle of this range. Craftsmanship is evident throughout all the homes here from the simple styling of cottages originally home to nursery laborers to large more embellished Tudor style homes. The Classic American Foursquare is the dominant house style in the neighborhood many with original chestnut, oak or gumwood interior detail and a signature front porch. These front porches, together with proximate sidewalks and a walking culture, create an environment where neighbors on front porches chat with neighbors walking by. 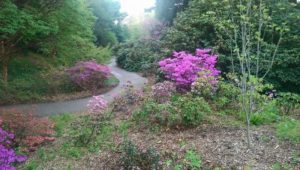 While Highland Park is a chief feature of the neighborhood and is a frequent destination for many residents; whether for a peaceful stroll, a challenging run, an outing on skis, or a photographic opportunity; the area has much more to offer. Within easy walking distance are the historic Cinema Theater, two playgrounds, an unusually large number of restaurants offering informal to elegant dining (ethnic cuisine — Indian, Chinese, Japanese, Southeast Asian, Cajun, Italian, German, Tex Mex, Ethiopian as well as classic diners). 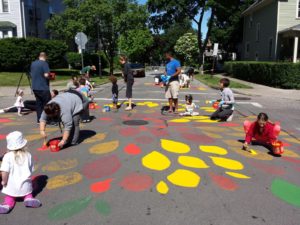 The real story of living here, however, lies in its residents. The very active neighborhood association consists of volunteers who promote the neighborhood, sponsor various activities and help interface with the city on development and many projects affecting the neighborhood.  Some of the sponsored activities include small concerts, street painting “Boulevart”, a taste of our neighborhood picnic, holiday parties, sponsor artworks, plant gardens and more.

Those who live here are proud to show visitors the panoramic views from the highest spots in the neighborhood, the beauties of Highland Park particularly in the spring, the Lamberton Conservatory year-round, the interesting and varied architecture, and ease of walking everywhere.  Come and spend some time in this very special part of Rochester!